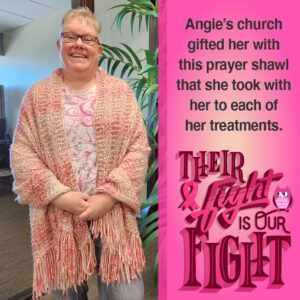 Angie Schroeder is a champion! She is celebrating her 11th year of being cancer free and she’s also a champion for annual mammograms starting at age 40. Her breast cancer diagnosis happened when she was just 41, at only her second mammogram ever. Her diagnosis and start of treatment were in a whirlwind that followed.

She got a call that every woman dreads – the doctor needs to see you today and no, it can’t wait until tomorrow. This was following that second mammogram that came back abnormal, and then an ultrasound followed by a needle core biopsy. Within six days from that phone call, Angie found herself at Oncology Associates (which would soon become Hall-Perrine Cancer Center) in Cedar Rapids, Iowa, meeting with her “cancer team”: her doctor, nurse navigator (patient advocate/case worker), surgeon, oncologist, and radiologist. She says that first meeting “took the worry out of it. It was like a playbook with a certainty that this was going to work. Just easy-peasy”. There was no need for a second opinion with a plan that was so clear and complete. Angie said she’s “in awe of the staff at Hall-Perrine. They are just amazing people!”

Angie’s treatment began right away and her family was by her side every step of the way. She has fond memories of playing a dice game called Toss Up while she endured her chemotherapy appointments. The game and the support of her family took her mind off of the uncomfortableness of the treatments. She is so thankful her family was with her through it all, especially through the exhaustion caused by the chemotherapy. As an avid scrapbooker, Angie also made sure photos were taken along every step of the journey so she could make a book when it was all over.

Another special item came from a women’s group at Angie’s church – a prayer shawl made of pink variegated yarn and wide as two big scarves put together. The shawl was prayed over by the women’s group before it was presented to Angie. It brought her so much comfort and she brought it with her to every single appointment and still has it today as a keepsake.

In thinking back on all the people she had in her corner throughout her cancer journey, Angie’s advice to anyone who has a friend or family member going through cancer or a serious illness is: “Check on them. Stay in touch. Keep your friendship the same as it is. Don’t let the cancer change it. Send cards. Just sit and talk. Don’t ask if you can help, just go and do it.”

Everyone at Acumen Advisors is honoring Angie this October for Breast Cancer Awareness Month. But mostly, we enjoy working with her every month of the year! We thank her for sharing her story and we are enjoying our month of “Think Pink” activities in celebration of Angie being cancer free!